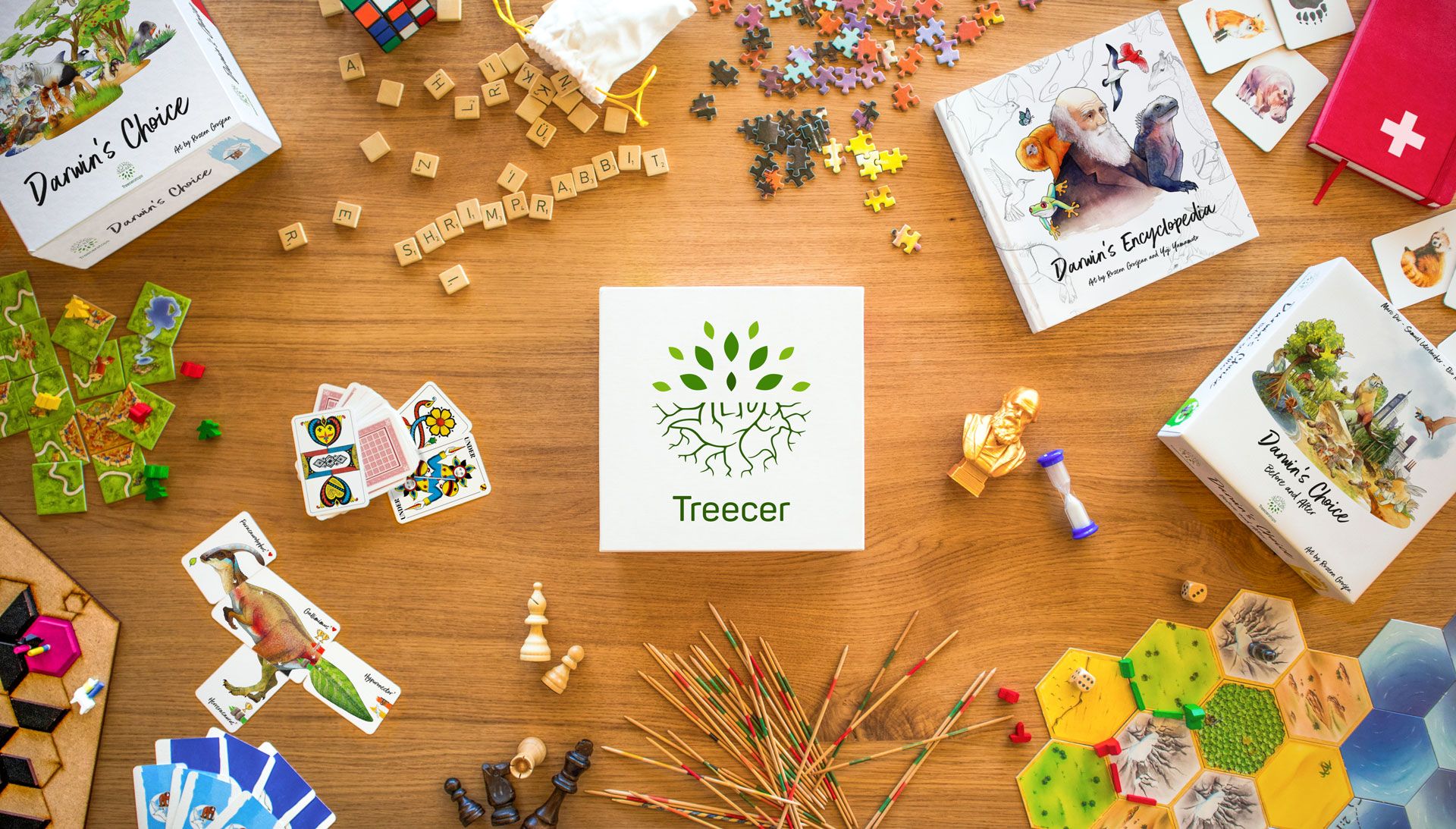 I hope you had a relaxing weekend 😊 This week we are going to delve a little deeper into the topic of game design. First, though, some information about P'achakuna.

At the end of last week I received the picture below from Ludofact 😊 it shows the first little llamas and wooden rocks that were completed. I think the llamas look very pretty and fluffy (and the rocks look like rocks xD). We are very happy with the quality.

Last week a backer asked if we are still on time with the production and yes, we are. You can always ask this of course, but it's just that if I don't write anything in the update about production, it means that nothing has changed, and we are on time. I only write something if something has changed or there is news. If there is a delay, I would communicate this immediately, this also outside the weekly update rhythm.

Some weeks ago I wrote that P'achakuna might contain a quite simple cardboard inlay. But we have now looked at this again with Ludofact and realized that it does not need one. The components are very tight in the box and therefore a simple inlay is not necessary (we can save this cardboard). This is what we planned from the beginning, i.e. during the campaign we never expected an inlay. Only a few weeks ago we considered it possible at short notice. I.e. you do not lose anything, but you get exactly what we promised in the campaign :)

Now to the main topic of this update, Game Development....

A backer asked some questions in a comment, which I will quote and answer here :) I think the answers give a good insight into game development. After that I will go into what Samuel and I are looking at in particular when someone presents their game to us. Question No.1 😉

"Maybe a bit bold to ask, but if you plan on any other 'long' updates, would it be possible to give a bit behind the scenes of your creative process and testing phase?"

Sure, that is what I'm doing right now :) important to note here is that there is no blueprint that can be applied to every game. Every game is different, sometimes you have a game that works right away and sometimes you have several tries until you finally get there. It depends a lot on the game, the theme, etc.

"How do you develop your initial idea to an actual playable game?"

First of all, I would like to mention here how we actually come up with the initial idea, because Samuel and I are also very goal-oriented here. We usually do not start with a fixed idea, but always make a collection of ideas first. From this collection we then pick out those ideas that we think will be best received on the market (because in the end the game has to be backed or bought) and secondly it has to have something unique. As you can see, there are a lot of new games coming out every week and also here on Kickstarter. If you want to succeed here, there are two possibilities according to me: (1) you have a unique game that is somehow new and really brings something new to the tables or (2) you perfect a game/topic e.g. you made the absolutely perfect Roman Empire game (which outshines all others). P'achakuna as an example brings something new to the table, I personally have never seen such a game board. If a game has neither (1) nor (2), then it has little chance of succeeding either in the market or on Kickstarter. Then it will simply disappear into the masses. So in summary, Samuel and I consider very early in development whether our ideas are marketable, and which is the best idea of them. So back to the question, how do you get from that idea to the first game prototype? I can only refer to us here and we always take a thematic approach i.e. Samuel and I do not say let us make a worker placement game, no. We take the topic, for example, evolution and try to implement these mechanisms in game form, so reality provides the game, and we now try to abstract it in game form. And of course you can implement the same reality differently as a game, but we always take the theme as a guide/starting point.

"How and when do you decide to iterate on a previous version (because the gameplay was not satisfying enough) and when is it enough?"

Again, there is no general answer. Samuel and I have the advantage that we always have vastly different perspectives on the same game/product, i.e. we can look at the same thing from completely different points of view. This helps us a lot when developing products because we can question ourselves quite well. For example, we are currently working on a game that was actually "finished" last fall, we could have released it that way and many people would have liked it, but we did not like it enough. Then we scrapped it again and are currently redoing everything 😊 if you are alone or your team has a too homogeneous opinion and you are unsure about the quality of your own work, then play tests are best recommended with other game designers or at prototype evenings or you test it in a game group, etc. But I will get to that point in a moment with the next question.

"At what moment in the testing phase do you decide to ask proof players to try the game out, and who do you ask for this? "

We always start testing almost immediately i.e. as soon as we have something playable, we start testing. We start with family and friends to smooth out the edges a bit. After that we visit board game groups, board game coffees, get KS backer or other game designers in the boat and test as broad as possible. Important is a basic rule: If a point is mentioned several times and this by different groups i.e. hardcore players, casual players, children etc. then it is really a problem and must be changed. Importantly, you do not have to please every group, it always depends on which customer segment you are targeting.

"We more or less established the core gameplay and gameplay elements, but we are struggling with going to the next phase, how do you decide on the right changes to add complexity without making it too difficult etc."

Again, there is understandably no universal answer because every game is of course different again. I can simply recommend that it is better to first build a game that is too complex and then simplify it, rather than the other way around. Taking something away is always easier than adding something that was not part of it before. That is the whole point of testing, to see what is still feasible for the target player group and what is no longer. Testing is generally the best help, if there are always questions about the same mechanism or the same mistakes happen again and again, then something is wrong or unintuitive. The same applies e.g. if a mechanism is never used or only in very few cases, then one must simply ask oneself, does it really need to be part of the game or is it simply an unnecessary "attachment". Because in the end you have to have a "round" game that has no loose ends, no unused mechanisms and just feels "closed"/finished. Important is here also always the rules "Killing your Darlings", sometimes you love a something too much e.g. a rule or a mechanism and this aspect is then only in the play because of you and does not bring any value to the table. Things like this have to be deleted. This is of course easier in the team with Samuel, because if one has such a thing, it is deleted by the other xD

That would have been the questions. But now I thought, this would be the perfect possibility to show you, what we (Samuel and me) look at, when someone presents us their game. As you may know, we also license games (like P'achakuna) or consult/coach people on their KS campaigns (here is the SERVICE part of our website). Often, we sit down with the people who contact us, answer questions, ask a lot of questions and just have an interesting exchange. After that we see if we are interested in the game, if we would like to consult the project or just give some tips in between (free of charge e.g. like with Rozenn Grosjean's Tarot Deck or the game below in the PS). If someone presents us their game, for whatever reason, these are the central aspects that are decisive for a good first impression:

In general it might be important to know what the options are to bring games to the market that you developed yourself, because there are only 2 options left from my perspective: (1) you put your game on Kickstarter/Gamefound etc. but the competition gets harder every year or (2) you license your game to a small game publisher. Big publishers almost never look at games from first time authors, freelance authors anymore i.e. the chances and I heard this from many are almost 0. To publish a game without any crowdfunding campaign will also be hard because nobody knows you and therefore nobody will take you into their assortment.

I hope you enjoyed this insight into game design/game presentation. If you have any questions about this or any other topic, you can always post them in the comment section. Then I can edit them directly or include them in an update. Have a great week,

PS: Tomorrow at 14:00 (CEST) the KS campaign of some good Swiss friends will start (now = tomorrow xD) we helped them with the Kickstarter campaign and are now curious how their game will be received. If you are interested, you can set a reminder for tomorrow HERE on Kickstarter. We will for sure support them.